As we are entering the Era of Technology, everything going to be smarter day-by-day. So, when we see Our agriculture we need also something which can reduce our effort and work. In this Smart Irrigation System, we focused on individual things like water need in the soil, monitoring system and many other things. in this project, we will make a system which will detect the moisture level in the soil and according to the moisture level, the water pump will work. No doubt, it would be a good irrigation science project and will help us in agriculture definitely. 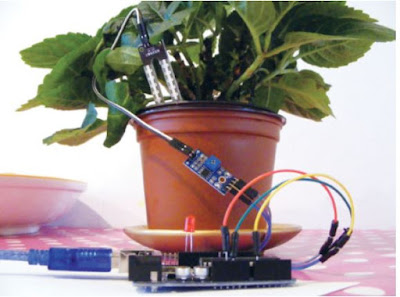 Sensor to be connected with the Arduino and Arduino connected to the relay module
soil sensor gives some value to the Arduino. Arduino will give some output according to the input from the sensor. for example, if the value is more than equal to the 970 then Arduino send a command to on the water pump. and if the input value from the sensor is less than equal to 969 then Arduino send a command to off the water pump. so, on this principle, smart irrigation system works. Now you can easily imagine the logic to implement this project.

there are lots of sensors. and we can use any sensor for different purposes. we have Bluetooth, accelerometer.which use to make Self-balancing robot which is also a good project. bluetooth sensor it has many electronics projects we have. 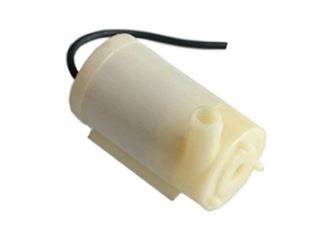 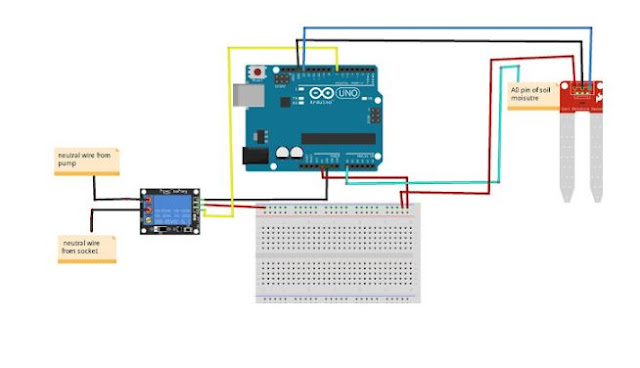 All connection clearly shown in the above circuit. do the connection carefully according to the circuit diagram.
C Code for Smart Irrigation System:-
int m=0;
void setup() {
// put your setup code here, to run once:
pinMode(A0, INPUT_PULLUP);
pinMode(8,OUTPUT);
Serial.begin(9600);
}
void loop() {
// put your main code here, to run repeatedly:
int m= analogRead(A0);
Serial.println(m);
delay(200);
if (m>=980)
{
digitalWrite(8, LOW);
}
else if(m<=970)
{
digitalWrite(8, HIGH);
}
else
{
digitalWrite(8, HIGH);
}
}
Copy this code and paste it into the Arduino IDE upload this code into your Arduino Board. Do connection after uploading the code. if you want to learn how to upload program in Arduino
Insert your soil moisture sensor into the soil. take a mug of water and dip water pump into it. connect a pipe to carry the water into the soil.